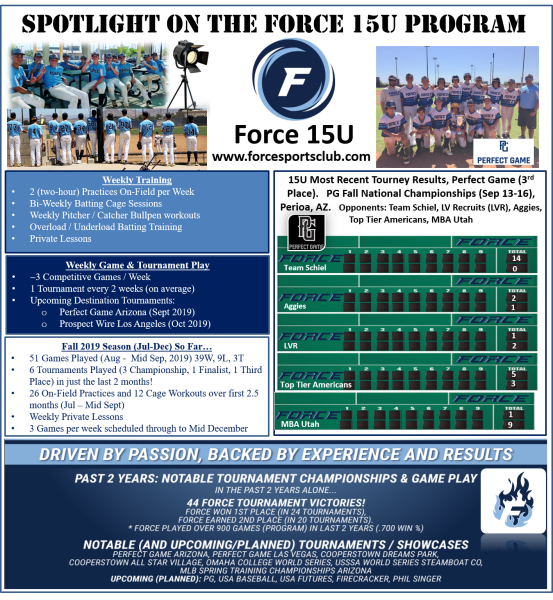 As part of our spotlight series, we acknowledge teams, players, coaches or parents across the organization that are doing great things! Today we are recognizing our Force 15U Program. The 15U is run by Coach Paul, Coach Dan, Coach Dean and Coach Rob primarily with training and support from the Force staff across the program.

The 15U team has been an example of where we would like all of our Force teams to get to over time. This team (in large part) has been playing together since 10U and have been following “The Force Way”. Their loyalty to the club, dedication and hard work have paid off in many ways. The 15U program runs a collegiate-style split squad approach where we operate as ONE TEAM! There is no A and B component, and all players, parents and coaches on the team understand that the goal is to develop individually and as a unit / team over time. By following the Force Way, players benefit from an extremely flexible schedule with opportunities to play a lot of targeted baseball. 15U has two full on-field team practices twice per week. In addition, they also do focused hitting workouts together every other week at the cages. Every week the 15U workouts have bullpen / catcher specialization components, team defense components, situational offense (baserunning, hitting) and a revisitation of mechanics.

Already this season (since July, 2019), the team has racked up over 50 games on the season (as of September 16, 2019). They’re sitting at 39W, 9L, 3T. The club has participated in 6 tournaments already this season. They have won (championship – 1st place) in 3 of those 6 tournaments, they’ve taken 2nd place (finalist) in one of those tournaments playing “up” at the 16U level. They also just returned from the 2019 Perfect Game (PG) FALL NATIONAL CHAMPIONSHIP for freshman (in Arizona) where they competed against some of the best teams around the country and they placed 3rd overall (out of 22 teams). Force knocked off the #1 Seed and finished in the semifinals with 3rd place overall. Here we saw a team of pitching that was phenomenal allowing only 2 runs (on average) with a Team ERA of 1.93! That earned Force Baseball 10th in ranking nationally for pitching (out of 323 PG-qualifying teams). The 15U was also ranked 29th nationally in team batting average (out of 323 teams).

The 15U follow a model that all teams follow (progressive training as teams move up in the program). Playing mostly wood bat tournaments from here on out, the team is batting an impressive .340 with almost 400 runs scored. Teams that stay together, play together and using the Force Way they will be the best they can be both individually and as a team.

Congrats to our 15U program. Keep up the great work!