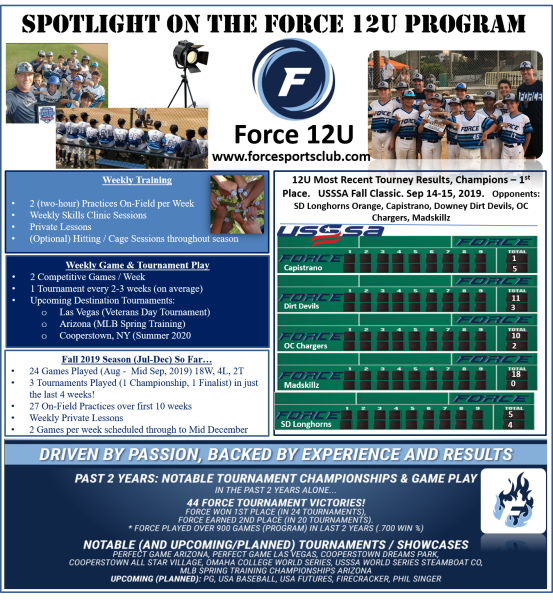 As part of our spotlight series, we acknowledge teams, players, coaches or parents across the organization that are doing great things! Today we are recognizing our Force 12U Program. The 12U is run by Coach Dave, Coach Paul and Coach Pat primarily with training and support from the Force staff across the program. The Force is strong with this team of players and coaches!

Similar to the Force 11U who was recently spotlighted, this team has worked hard since last fall (2018) when they were 11U and becoming acclimated to the landscape of advanced baseball competition. This squad put their hard work to the test in over 40 games last season and racked up another 15-20 games in the spring. Where most clubs play 1 game per week (at best), this team was given the opportunity to practice twice weekly, attend weekly skills sessions and benefited from a 40-game season in the fall of 2018 to work on rapid improvement. Force 12U has continued this into the 2019 fall season. The team has been up-and-running since early July and they’ve been hard at work. With two practices per week, multiple games on the weekends the players have been given the flexibility to get game work in while balancing their availability.

It’s not about wins and losses, especially at this age, but they are seeing good results in that department. Force 12U is a combined 56(W), 17(L) and 5(T) since the fall. The 12U has played in three tournaments this season already having won the championship at their most recent USSSA (Fall Classic, Sept 2019). Here they racked up 50 hits and battled through 5 games to win the Championship, beating out the SD Longhorns to take home the rings. They were also finalists (2nd Place) in the highly competitive labor day tournament and they competed very well in their first tourney of the season.

Since beginning in mid July, Force 12U has already tallied up 24 games as of early/mid September this season. They have a team batting average of .359 this season so far which has been steadily on the rise. Just as impressive this team has racked up a whopping 19 home runs on the season. They have racked up over 200 runs scored on the season with just as many hits (204 runs, 195 hits).

We have seen 16 different pitchers in the rotation already this season already with a combined ERA of 3.7 on the season. Keep it up Force 12U!

Keep up the great work!